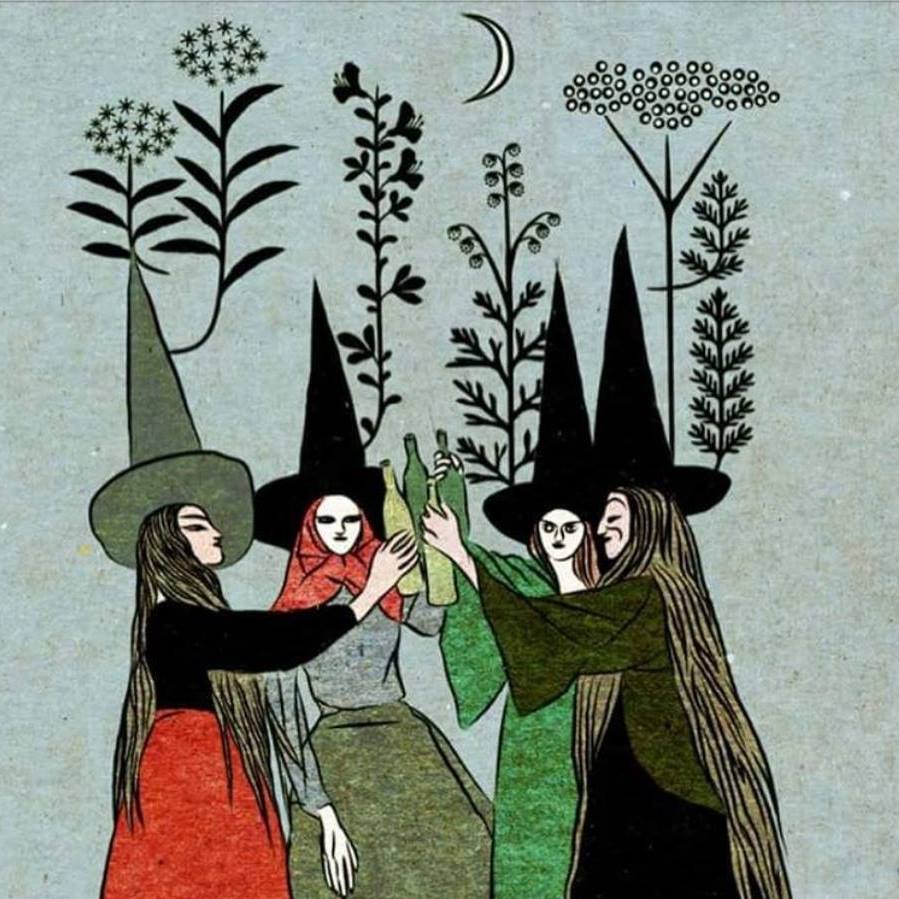 I have always loved Autumn and Halloween, even before I had any inklings of becoming an herbalist. And since my relationship with the natural world has deepened, so has my appreciation for this season. Since Halloween is associated with witches and witches are associated with herbalism, I want to share some of my favorite sacred herbs that I use in my practice .
If you want to read more on the connection between herbalists and witches, check out this article I wrote on the subject.

Mugwort (Artemisia vulgaris)- a well known women’s herb, mugwort is a blood-mover, emmenagogue, digestive bitter and a dream herb. She has a reputation for bringing vivid dreams and strengthening intuitive faculties. You can smoke her, take her as a tincture or a tea, use her as a smudge or a dream pillow. Because of its blood-moving properties, this is an herb that you do not want to take during pregnancy.

a plant said to connect heaven to earth. Angelica has been used historically by shamans to aid in the journeying between realms. In Native American tradition it is used on the rocks in sweat lodges to open the mind, imagination and the pores of the skin. Used internally it also brings blood flow to the periphery,  supports the smooth flow of vital energy, strengthens digestion and promotes expectoration. It breaks up stagnation and congestion of fluids, phlegm and blood. Best to avoid this one during pregnancy too.

Elder (Sambucus nigra)- Elder is rich with lore of the goddess (and witches), more specifically the crone. She is wise, powerful, and protective. On a physical level she protects us against viruses and respiratory illness. She is diaphoretic, diuretic, blood-moving, blood-building, and opening to the hollow tubes of the body (blood vessels, bronchioles, colon, etc.). Join us for Stars, Spells & Sambucus on Oct. 29th to learn more!

Rosemary (Rosemarinus officinalis)-  Rosemary for remembrance is what Shakespeare said.

Tis true, rosemary has been scientific-ally shown to improve memory & cognitive function. Her volatile oils work on the limbic system. I love Maia Toll’s description: “Rosemary can ease remembrance, softening sharp edges, or she can dredge the distant paste, pulling on your DNA to bring forward the longings of lineage. Crush the leaves. Hold them to your nose. The past is encoded into our cellular memory. Rosemary whispers Sink into the knowledge that lives in your bones. Let memory rise up from the body of your being.” (From The Illustrated Herbiary)

Yarrow (Achillea millefolium)- Bitter in taste and feathery in appearance, yarrow is another herb of protection. Yarrow helps us with boundaries, whether physical, emotional or spiritual. Named after Achilles, yarrow is the quintessential wound herb. Topically it is antiseptic and can stop bleeding. Internally, it can improve blood flow, regulating the blood by reducing platelet aggregation and promoting clotting when needed. It can support digestion, diaphoresis and diuresis. Use as a tea, tincture, poultice, salve or bath.

yet another protective plant, used in medieval times to exorcise demons. In modern times it’s a well-known antidepressant (are depressive thought-forms any different than demons?) St. John’s Wort is a mood boosting herb with so much more to offer. It’s also an antiviral, anti-inflammatory and nerve tonic (wonderful for nerve pain & burns). I think of it primarily as a solar plexus strengthener. It improves digestion and detoxification. Its bright, solar energy increases the internal flame, which strengthens one’s sense of self, confidence and will power. It brings light to dark places, and a bright internal flame is truly the best protection. Fresh plant tincture or oil is best. I avoid using St. John’s wort internally with any form of medication, unless using the homeopathic form, which has no drug interactions.