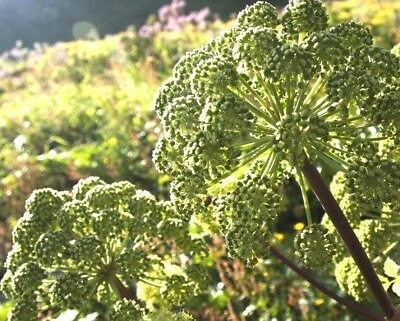 Description: from Maude Grieves: The stems are 4-6 feet high and hollow. The foliage is bold and pleasing, the leaves are on long stout, hollow footstalks, often 3’ in length, reddish purple at the much dilated, clasping bases; the blades, of a bright green color, are much cut into, being composed of numerous small leaflets, divided into 3 principal groups, each of which is again subdivided into three lesser groups. The edges of the leaflets are finely serrated. The flowers, small and numerous, yellowish or greenish in color, are grouped into large, globular umbels. They blossom in July and are succeeded by pale yellow, oblong fruits, 1/6-1/4 inch in length when ripe. Both the odor and the taste of the fruits are pleasantly aromatic.

Cultivation: prefers deep, moist loam in a shady position. The plant thrives in damp soil and love to grow near running water.

Habitat: grows along rivers and on the shore of the Baltic regions and the Scandinavian states, south into Alpine areas. It can be grown in gardens in North America and is naturalized in some places.

Energetics: pungent, bitter, sweet, oily, warming, cooling, stimulating, antiseptic (volatile oils are moving, which can be both warming and cooling)

“Angelica is a useful expectorant for coughs, bronchitis and pleurisy, especially when accompanied by fever, cold or influenza. Angelica leaf may be used as a compress to treat inflammations of the chest. The content of carminative essential oil explains its use in easing intestinal colic and flatulence. As a digestive agent, angelica stimulates appetite and may be helpful in anorexia nervosa. It has also been shown to help ease rheumatic inflammations. In cystitis, it acts as a urinary antiseptic. The furanocoumarin constituent bergapten has been used in the PUVA treatment of psoriasis (PUVA is an acronym describing oral administration of psoralen and subsequent exposure to long-wavelength ultraviolet light).

Angelica is a common flavoring for liqueurs, such as chartreuse and Benedictine, and is an ingredient of gin and vermouth. The leaves may be used as a garnish or in salads, and the candied stalks in cakes and pudding.”

In European phytotherapy it is said that angelica calms both the sympathetic and the parasympathetic sides of the autonomic nervous system. When the sympathetic is overactive it creates a condition of nervousness and shuts down the digestion, creating a condition of asthenia (the pale, thin, dry, vata type) when the parasympathetic is dominant we have a condition of gastrointestinal excess, creating a hot digestion with a heavy, damp, cool interior. Because angelica affects the circulation, the thin types may have purple fingers from poor peripheral circulation, while the thick ones may have blue-green-yellow-gray coloration around their veins (look at the forearms) due to blood stagnation.

It makes fluids more active and breaks up excessive concentrations of water, phlegm and blood. It promotes peripheral circulation, and opens the lungs and skin. Hence it is beneficial for heavy, stout, blood-stagnant people (bear people) who need their relaxed, watery side activated.

The bitters and sugars get the appetite and secretions going, while the aromatic compounds stimulate circulation to the stomach and periphery. The oil stimulates the “fat of the kidneys,” the adrenal cortex, releasing cortisol, which supports digestion and raises blood sugar levels.

The circulation of the blood is opened to the periphery to bring nutrition to all parts of the body, to stimulate fluid movement in the possibly dried out joints, to rebuild the fatty deposits insulating the nerves, and to improve circulation to the hands, feet and uterus. Thus, angelica is an excellent remedy for the undernourished “asthenic” (Rudolph Weiss).

By opening the pores to release perspiration and supporting circulation, angelica is remedial for chill from dampness and cold. It was a traditional remedy for contagious diseases.

The lungs are closely allied with the skin. As a lung remedy, angelica is indicated in old bronchitis cases where there is exhaustion and the mucus is thin and difficult to expectorate. It dries and warms the lungs. It improves circulation to the lungs, thus aeration through the blood. As the phlegm improves in texture and the blood comes in, the mucosa secrete new immune cells and enzymes, which renew the defenses of the respiratory tract.

Angelica acts on the lymphatics as well. And through its action on the blood angelica assists the liver. It improves circulation through the portal vein and the hepatic artery, bringing more food/toxins for metabolism.  And, through the action on the circulation and the liver, angelica influences the uterus. By warming and stirring the blood it relieves blood congestion and cramping.

Cautions: Not recommended during pregnancy. Because of its furanocoumarin constituents, angelica may provoke photosensitivity reactions. (these are not easily extracted in water). During treatment with angelica, patients should avoid prolonged sunbathing and exposure to strong UV radiation. In addition, some authorities state that because of the coumarin constituents, high doses of angelica may interfere with anticoagulant therapy.

Preparation:  The roots easily turn rancid. They should be cut lengthwise, rapidly dried in a heated stove, crushed and stored airtight. Freezing the seeds preserves their properties and promotes germination.

Boiling the root produces an aromatic bitter, while steeping produces an anesthetic and astringent for the stomach lining. Alcohol improves the relaxing and antispasmodic properties (Michael Moore).

Dosage: Tincture dosage is 2-5 ml three times a day (assuming 1:5 in 45%). To make a decoction, please 1 tsp of cut root in 1 cup of water. Bring to a boil, and simmer for 2 minutes. Remove from heat and let stand for 15 minutes. Decoction dosage is 1 cup tid.

Matt Wood says that small doses are relaxing while excessive doses can cause depression of the CNS. He recommends 1-3 drops 1-3 x /day, or more in acute conditions.

Signatures: (per Matthew Wood)  The root of angelica is brown, furry, oily and pungent—the picture of “bear medicine” in American Indian medicine. Bears eat such roots in the spring to wake up and start rebuilding their mass. (Also osha, lomatium, American liquorice, balsam root and spikenard). These stimulate the cortisol side of the adrenal cortex to increase appetite, digestion and nutrition. Hence, they are suited to thin, pale, undernourished people.

Just as the bear goes into hibernation through the winter, bear medicines usually relax the mind, open the imagination, and bring people into dreamtime. The most effective way to bring this on is to burn the root and smell the fumes. They are gently relaxing to the mind and body while activating to the imagination.

“Angelica aligns you to walk with your guardian angel”- Julia Graves

Looking at the root from a different angle, it is light and airy. In fact, it contains pockets of air. It grows in damp conditions. Thus, it aerates or brings air into the watery realm. It makes fluids more active and breaks up excessive concentrations of water, phlegm and blood.

Bear medicines like angelica are used on the rocks in the American Indian sweat lodge. This serves both a spiritual and physical purpose, as the vapors open the imagination and the mind, while at the same time helping to open the skin and bring the circulation to the surface.

Angelica root worn around the neck was said to offer protection against psychic and epidemic contagion.

**This article is for educational purposes only and is not intended to diagnose, treat or cure any disease** 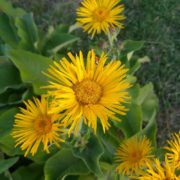