(Piper methysticum)
Kava root is a well-known herb used by many to relieve anxious states of mind and to promote a relaxed & euphoric mood. Kava is a large shrub native to Oceana and cultivated from Hawaii to New Guinea. The root is traditionally  pulverized & masticated in water or coconut water, then filtered and served at room temperature. The pungent & bitter taste is followed by a tingling sensation on the tongue, as the kavalactones begin to exert their analgesic effect.

Uses & Indications: Kava is primarily used to treat anxiety. It has been shown to reduce anxiety without dampening mental alertness or reaction time. In fact, it seems to improve concentration in some. As an antispasmodic, Kava also relaxes muscular tension and spasm, which makes it especially helpful for those who need to relax both body and mind.  In addition to relaxing tension, it has mild pain-relieving properties and has demonstrated “significant analgesic effects in animal studies, apparently via non-opiate pathways” (1). As a hypnotic, it can also be an ally for those struggling with sleep due to anxiety or muscular tension/pain. Kava has a reputation for helping menopausal women who struggle with mood swings and sleep troubles. Because it is warming, it may exacerbate hot flashes in some.

Kava is traditionally used among Pacific Islanders in ceremony. It is drunk during important political meetings and councils to facilitate an environment of peace and cooperation (How can we get our current leaders to give this a try!?) Kava Chai is a favorite beverage at herbal gatherings, shared at the end of the day, usually accompanied by live music and bare feet in the grass. I can assure you that it is effective at promoting a mild state of euphoria, sometimes resulting in uncontrollable giggles:)

Kava effects everyone differently. For some, it will make you feel giddy, light and uninhibited. For others, it can make you very sleepy. I believe that how kava effects your mood is highly dependent on what your body needs at that time, as well as the dose. Start small. You can always take more.

Alleged Hepatotoxicity & Safety Concerns: Kava should not be taken concurrently with alcohol and should be avoided by heavy alcohol users or anyone with pre-existing liver damage. There is a lot of controversy around the safety of kava, and some regulatory bodies have reacted to allegations of kava causing liver damage, leading kava to be restricted in some countries. As of 2004, a total of 78 cases of liver toxicity associated with kava use had been reported worldwide. However, most case reports had other drugs/alcohol involved (2). After review of the hepatotoxicity cases, it has been concluded that “the hepatotoxicity cases that were definitely attributable to kava were most likely immunologically mediated idiosyncratic drug interactions (IDRs), rather than a direct toxic effect” (3)

One study conducted in 2012 suggested that kava extract caused liver cancer in rodents who were fed massive amounts of kava extract in corn oil (Exposed rats received either 0.1, 0.3 or 1 gram of kava kava extract per kilogram of body weight and mice received 0.25, 0.5, or 1 g/kg), 5 days a week, for 2 years (2). This dose would be equivalent to 17-68 grams a day for a 150 lb human! That is over 100 times the dosing range recommended by Commission E.

Joseph M. Betz, Ph.D., a scientist with the National Institute of Health has a great presentation that discusses the controversy. After reviewing his presentation, it seems clear than when taken in appropriate doses, hepatotoxic effects are rare. Three studies that he reviewed (Sarris et al 2009, Conner et al. 2006, and Gasbur and Klimm 2003) all reported that Kava was well-tolerated among the participants and that no evidence of hepatoxicity was found (2).

Of coarse, every herb effects every person differently, and Kava does seem to have a higher potential than other plants to produce some kind of allergic reaction, especially among Caucasians. So, if you are interested in trying kava for the first time, please start with a low dose and listen to your body. The most common adverse reaction reported are in the form of dry, itchy skin rashes that have been known to occur among heavy kava users. If you notice any symptoms, on your skin or elsewhere, discontinue use. Most cases of clinically documented reactions have subsided within 24 hours of discontinuation.

Contraindications: Kava is probably safe for pregnant and breast-feeding women, when used in moderate doses, but caution should be used. Commission E and the Australian TGA recommend that kava-containing medicines are avoided by pregnant and nursing women, “but these ensued from lack of data rather than from any direct concerns” (3). “Women in some areas of New Guinea traditionally drank kava during pregnancy to promote the flow of milk…” “to induce an easy labor and to correct displacement of the womb” (3). There is no evidence of harmful effects on the fetus in animal studies or case studies. In Hawaii, women avoid any kava immediately after becoming pregnant. And there are reports of kava leaf being used topically to induce miscarriage (3). Taking all of this into consideration, it’s probably best to avoid kava during the first trimester.

Dosage: German Commission E recommends preparations equivalent to 60-120 mg of kavalactones taken 3 times a day (1). That’s about 840 mg/week. Kava does have the potential to be abused, like all mind-altering substances. Please use the plant with respect and gratitude, and remember that while all plants are here to help, they will let you know when you have crossed a line.

This month, in celebration of Kava, we are offering 10% off of our Kava Cocoa and Kava Root Bath. 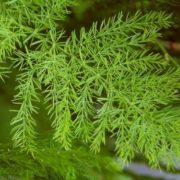